Netsmart boasts multiple locations across the U.S. where many of our dedicated associates call home. One of those locations is in Great River, New York, where some of our FUTURES have been stationed for the last few weeks. Join Engineering FUTURES Colin Williamson, Rishab Chhabra, Lisa Guo and Skyler Tangney-Centor as they give us a taste of what it’s been like for them as an East Coast FUTURE.

While our time working in the Great River office was short, we got to meet a lot of great people that work at Netsmart both in the office and out at events. The first Monday I came in to work, groggy from the traveling I had done, and Netsmart associate Ryan Behan got the four of us together in a conference room to make sure we all had everything we needed, knew where food and activities were outside of work, and got us set up in the office. I could immediately tell that the same caring and passion that I had felt in Kansas was present here in Great River as well. I soon got set up at a desk right next to my mentor, Jeff Satterly, and was able to immediately start seeing the advantages to having my mentor next to me instead of across the country. While Skype makes communication a lot easier, nothing is quite like being able to show somebody your work in person for them to look at. It didn’t seem like I had been spending a lot of time waiting on responses, but being able to work directly with my team made me realize how much faster and more efficiently I could work in person instead of remotely. 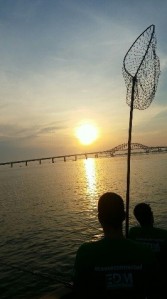 Despite all of the work that got done in Great River, there were also a couple of days where we were able to get away from the office and have some fun. The first week that we were there about 30 of us went on the annual fishing trip. We headed out to the boat dock after work, climbed aboard, and soon enough we were all standing over the ledge hoping our rods would be the one to pull the next fish. I wasn’t able to catch any fish myself, but one associate managed to catch a fluke on the other side of the boat from me. A few minutes later, after which I had forgotten and went back to my own pole, one of the boat hands came around with a plate of delicious looking fish. Apparently he had sliced the fluke that we caught into sashimi and brought it around for everyone to try a little, and it was as delicious as promised. After a few hours and unfortunately, only a couple more fish, we were all ready to head back in to land for the night.

In the wise words of Billy Mays: “But wait, there’s more!” That’s right, we didn’t just go on a fishing trip, we also had a day of “Coding at the Beach.” Now before you get any ideas of what we looked like on the beach, we were the probably goofy looking group of 10-15 people sitting under two tents at makeshift desks on our laptops on the beach trying to do work. . We spent the time after work hanging out, playing spike ball, and just enjoying our time at the beach. It was a great day, and the mixture of getting work done but having a good time while doing it was a running theme of our time here in my opinion. Overall, I had a great time in Great River and it really helped show me that even across the country, Netsmart associates still maintain the same passion for both clients and the workplace.

Although Kansas and New York are physically very distant, I have had a similar experience in both offices. Both offices are filled with people that are passionate about what they work on at Netsmart and the impact of their solutions. It was great to see that this passion carried over across offices, along with the kindness and care I experienced in Overland Park. After working a few weeks in Overland Park, I was a little worried that transitioning offices for a just a few weeks would be difficult or awkward. When we first arrived I was surprised to see that we were quickly welcomed into the office. We were immediately given space to work and greeted by associates as if we had been working there all along. 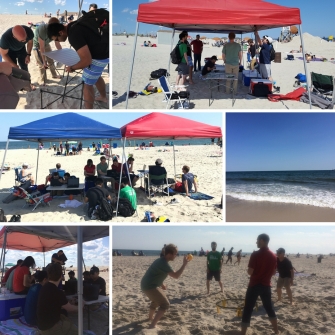 We also had the opportunity to have quite a lot of fun outside the office. Our first Thursday in Great River we went on a fishing trip with many of the associates. After work we all packed into our cars and met at the dock. Next thing you know, we’re all hoping to catch some fish (we caught each other’s lines more than any fish). Luckily, some people succeeded and we got to have delicious fresh sashimi right on the boat. Our second week, we went to the beach to finish the day with “Coding at the Beach.” As the name suggests, we setup our laptops on the beach and attempted to get some work done with what little Wi-Fi and laptop battery we had. Once we were all done for the work for the day we all had fun playing spike ball, passing around a football, and just getting to know one another. These days provided a great way to let off some steam and have fun. I appreciate that Netsmart gives their associates opportunities to “work hard, play hard” and not just “work hard.”

Overall, I have had a great time, in and out of the office, while in Great River. Everyone here has been kind and friendly, but fortunately so has everyone in Overland Park. The biggest challenge after returning to Kansas will be discussing issues over Skype with my mentor, David Fann, instead of just having him walk over to my cubicle. Otherwise, I look forward to being back in Overland Park for the next few weeks to finish out this summer as a FUTURE.

Working at Netsmart for only five weeks has taught me many skills to become a successful software engineer. Before coming to Netsmart I expected to work on a small intern project that would never be used. This was not the case when I was told I would be producing software that would help hundreds of people living in the state of Missouri. On the first day, I was given a tutorial where I had to transform hundreds of lines of code into workable software. My initial thought was “this looks easy; I’ll finish this in a day.” Turns out I needed a whole week to complete it. During this week I was taken through the whole development process of software from discover, design, development and into delivery from just the tutorial alone. 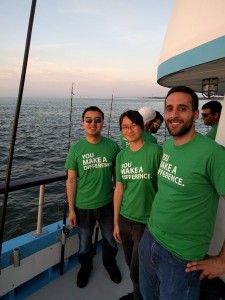 For the next three weeks, I worked in the Great River office in New York with three other FUTURES. Each week we had fun events with the full time associates. The first week we went on a fishing trip to Robert Moses State Park and ate sashimi from our freshly caught fish. The second week we went on a trip to the beach and had a “Coding at the Beach” event. For our last week in Great River, we had a barbecue for lunch at the office. These events were a good way for us to take time away from our cubicles, and out into the sun to have fun. I was very impressed by how well Netsmart treats their associates. I can’t think of any other company that would take their employees out to work at the beach!

Working at the Great River office has been a great experience. Everyone here is friendly and welcoming. My mentor has been a great help in guiding me throughout my project and I never feel like I am bothering him or the rest of the team even though I ask a plethora of questions throughout the day. My mentor and my team have always been encouraging me to ask more. As a FUTURE I feel like I am truly making a difference working at Netsmart.

I can’t believe that we are already halfway through the summer. Once again time has been flying by this year and so far this summer has been a blast. I was very much looking forward to returning to the Netsmart family to be a FUTURE again. Last year was one of the most helpful and fun summers that I have ever been lucky enough to enjoy. Coming back, I got to see a change of scenery from last year. For the first two weeks we were working in Kansas before traveling to Great River to spend a few weeks in our home office. Working in Great River for a few weeks has been nice. The offices were under renovation last year when were here so seeing them completed is a nice change. Also, it is a little bit of a challenge to communicate with my mentor and team members while I was in Kansas as they are all stationed in New York. Being able to work alongside my team and my mentor allowed me to make a huge chunk of progress on my project over the past few weeks.

We have been having our fair share of fun out here in Great River as well. During the first week we were here, there was a Netsmart fishing trip that we went on. This night was fun, there were a lot of people from the company just hanging out, swapping stories, and having a good time while we caught some fish, at least while we tried to catch fish. Some of us were lucky and caught some sea creatures. Someone caught a fluke that the captain of the boat used it to make sashimi. I have eaten sushi before but, this was an interesting experience as I had never eaten fish that had literally been swimming in the ocean minutes before.

That wasn’t the only fun we had out in Great River though. We also spent an afternoon coding on the beach. This was something we also did last year, but this year seemed more successful. We came more prepared and had a nice workstation set up under a few canopies with some chairs. We played some spike ball and got to relax after a long week. It still was a sight to see for the other beach goers who hadn’t planned on sitting next to a small office of coders working with laptops on the beach.

Although I was really looking forward to coming back to New York to work, now as we near the end of our time here I am excited to return to Kansas. Having had the full experience working in New York last summer to compare to, I really enjoy working and living with all the other FUTURES in Kansas. It is a nice change of pace from what I am used to a majority of the year and a very unique opportunity that I might have never had otherwise. I look forward to coming back to the Midwest and finishing the summer!