When I got that call on June 23, 2013, everything changed. It was the biggest shock of my life and the worst thing that could ever happen to me. It’s five years later and I still really can’t believe my son Ryan took his own life.

I keep trying to think if there is any way it couldn’t really be true, but I know it is. Ryan had so many friends and with the love and support from them, and my own family and friends, I have survived. I still have what I call “Ryan days or moments,” but I get through them.

Our family is really close to Ryan’s club soccer coach, Dustin Ottesen. Dustin knew other former players from other states who took their own lives, so it was also something that really weighed on him. We talked about what we could do to try to make a difference for individuals who may be struggling with thoughts of suicide.

We had Ryan cremated and I thought it would be a cool idea to get his friends together at a local field where he played his high school soccer games, spread some of his ashes, and his friends could do a little kick around. Then that grew into, “Why not play a real game and try to raise money for suicide awareness?” I talked to some of my friends and Dustin, and everyone thought it was a great idea, so we worked together over the last four years on the R.Y.A.N Benefit Soccer Game that’s held in the Kansas City area. 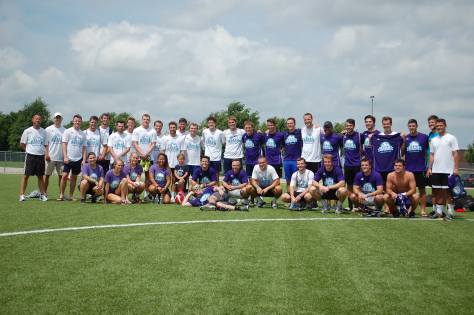 The acronym comes from a friend of mine who made it when Ryan died, and it seemed like a good fit for the message we wanted to convey through the game:

Ten of his friends spoke at his funeral and they made shirts with this on the front. It’s a wonderful way to honor Ryan while creating awareness about suicide.

Along with a great time we have at the game, we work to raise money for 501 (c)(3) organizations, EveryDayMatters and  Suicide Awareness Survivor Support (SASS). Funds are raised from sponsor donations, admission fee to the game, concessions, t-shirt sales, raffle items and silent auction items.  We have some great items again this year including fantastic gift bags, sports event tickets and signed sports memorabilia from Kansas City pro athletes and more.

Between Ryan’s friends and his brother’s friends, we had more than 40 players that first year! That year and every year since has seen a great showing of support for Ryan, our family and the organizations we support.

If you’re in the Kansas City area on Saturday, August 4, we encourage you to join us at 6 p.m. at Scheels Overland Park Soccer Complex for this year’s game. If you can’t be there in person, you can make a donation here.

With all the conversation surrounding suicide in the news recently, creating awareness and a safe place for conversation is more important than ever. 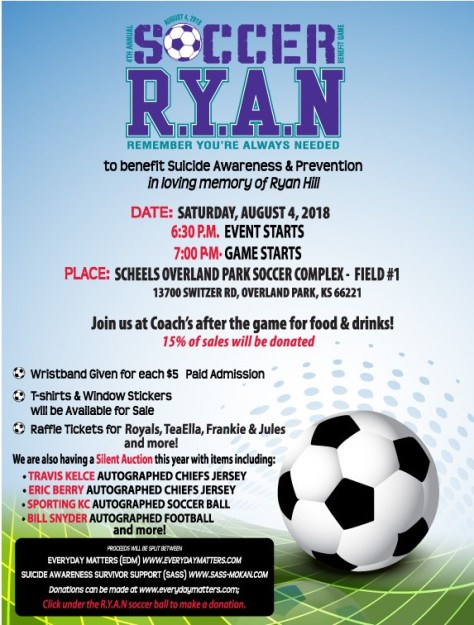